Sold a doll on Etsy.com today! 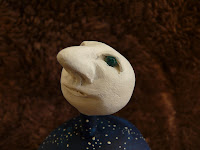 Many years ago, I discovered an image of an ancient sculpture. It was a clay sculpture of a woman, and her dress was really large and bell shaped whereas her head, arms and legs were unusually small. It was said to be an image of Hera. I thought it was so charming!

Around that time, I thought of mass producing small dolls, in the hopes of supporting my more time consuming and substantial pieces. I jumped into that project, but soon my energy drained, and so a whole bunch of bodies, arms and legs lived in bags and moved with me from place to place.

Then recently, a local Arts Council (of which I was a member) had a Holiday sale, so I quickly put together three of these Bell dolls to put in the sale. I had such a good time making them, that I decided to open a doll shop on Etsy.com. Feel free to check it out here: JenniferRussellDolls 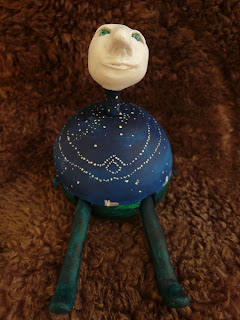 This little guy is named The Stargazer. I have made several dolls similar to this one. I think that those round, bell shaped bodies speak out to becoming a landscape. His head is the moon, the stars his shirt, and the earth his pants. He is eternally gazing into the universe with a look of bewilderment and his hands clasped in contemplation.

He will be leaving me soon, traveling through the postal service to a far away place where he will be happy. How could he not be happy? Look at that face!
Email Post