Puppet Making for the Center for Symbolic Studies

Every spring the Center for Symbolic Studies holds a special festival to celebrate Beltane.

A bit like a miniature Renaissance Faire, people attend in their colorful finery and we all sit on the grass to listen to musicians and watch the Vanaver Caravan perform the annual pagent. Every year, a new theme is chosen for the pagent, but there is always the banishing of winter and welcoming of summer.
Many wonderful, larger than life puppets have been made by various people, but especially Robin Larsen. They are used during the procession or sometimes in the pagent itself.

Last summer, I decided to create a new puppet. I offered two designs and the Jester design won. Well, it took a lot longer to make that puppet than I had thought it would! 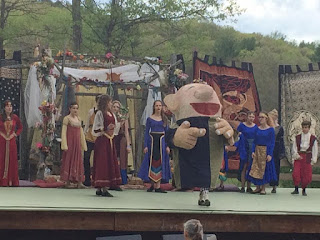 When I decided to make this puppet, I imagined him dancing around the crowd, telling jokes and making fun of people. 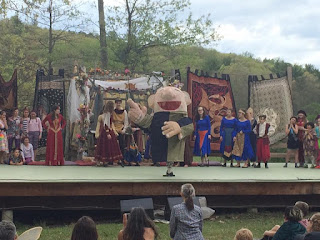 In this year's story a prince is on his way to court to be crowned the new King of May, but the he does not know the way. The Jester lies to him, saying that he knows the way and leads him into the forest.

When the times comes to crown the new king, he is nowhere to be found, so the Jester suggests that riddles be told to chose a new May King. Three riddles are told, but no one knows what the answers are. The Jester says, "I know a riddle!" and whispers it into the riddle master's ear.

The riddle is, "What's in my pocket?" and the Jester says, "I know....a sausage!" and since he knows the answer he is crowned the new King, but the May Queen is instantly suspicious.

The New King, admits to being a Fool, and so says that he needs an adviser and chooses... the Winter King (puppet)! Winter comes back bringing a Blizzard Beast (stilted puppet)! The May Queen's champion challenges the beast and vanquishes it. From the dead beast springs a youth who does some pretty amazing gymnastics (especially from the back of a horse!) and they both ride off together.

The Queen decides that this sillies must end, and she calls her dancers to do a special staff dance that thwarts the Winter King, and as he lays down, we discover that the lost May Prince was underneath the Winter King the whole time and is under a spell. The Queen kisses him, and he returns to our world. 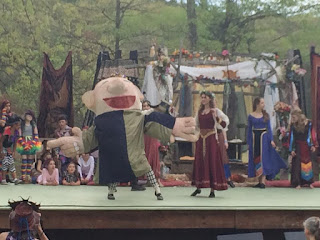 The Jester's crown is taken from him and places on the head of the rightful king. The Jester shrugs and says, "It was fun while it lasted!"

P.S. There were a small crew of people who contributed to the making of this puppet! It was tremendous fun to participate in every aspect of this character, from the making, story development and even performance. The hilarious voice of the puppet was done by Carl Welden.