The Concrete Beast is Finished! 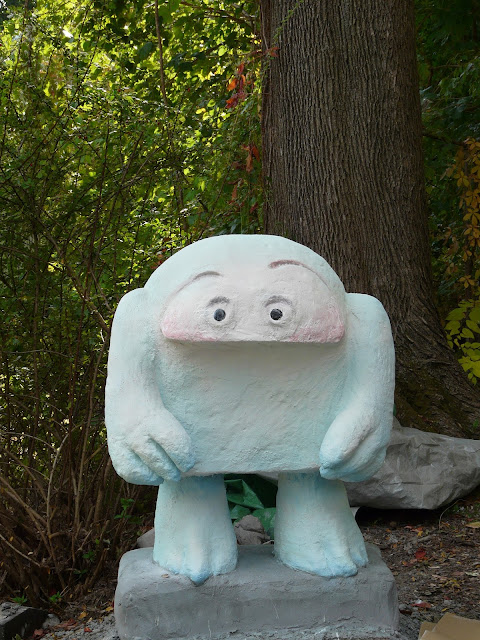 This is the latest Beast! It is 3 feet tall and made with styrofoam and layers of concrete.

Here's what it looked like when it was still in the studio: 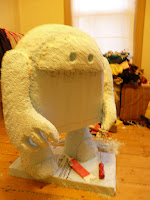 I had wanted its arms to move, but with the guidance of artist and builder of many wonderful things, Mark Girard, we decided that the arms must be securely attached...with aluminum nails...really long aluminum nails. And all the seams were filled with caulk. 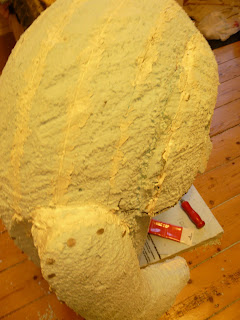 At the location, where the beast will live, I built added height to the foundation 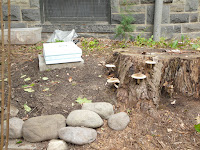 and covered it with layers of concrete! It was my first time working with this medium. I used Mortar Mix type N, and the first two bags had a super fine aggregate, like sand, which resulted in a super smooth layer. But the last bag, which was the last layer on the entire sculpture, had large grit in it. This made a more rough exterior. Oh well. 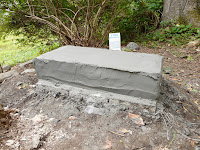 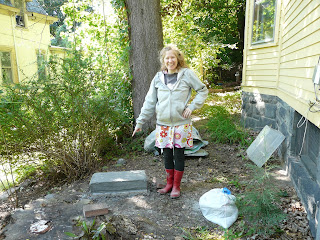 I was very proud of my accomplishment!

Knowing that this process would take weeks, my dear friends created a tent from a tarp to keep off any rain. 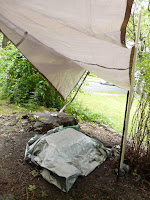 Well, although there were some misty days with a drop or two, it didn't really rain. We are in a severe drought. Please may it rain. 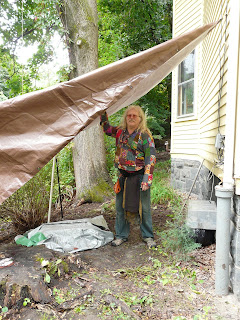 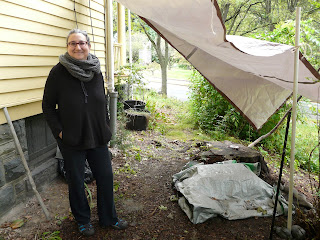 Then came the day when the beast form arrived at the site. 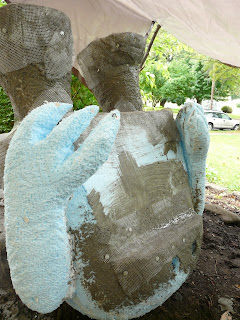 I began by working all of the undercut sections. First a slurry of concrete, then fiberglass mesh (the concrete oozes through the space between the fibers, holding it in place, and the mesh gives an additional layer of structure. 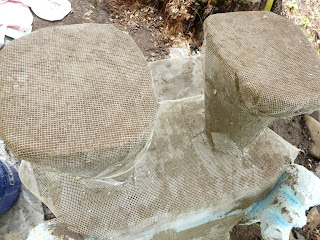 To my dismay, I discovered that concrete does not adhere to undercut areas well AT ALL! Just when you think you've finally got a layer stuck, and you trowel that spot...one...more...time...the whole layer falls off! Gah! Sometimes it's great to be wearing a respirator on your face, because people can't hear you curse! (It's important to not inhale concrete dust.)

Maybe there's a secret that I don't know about, but I stuck with it and sloooowly I got layers to stick. 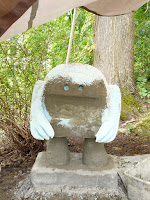 The beast is looking a bit uncertain! 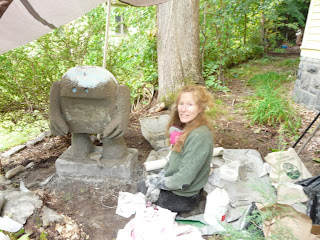 Where are my legs? Well, I knew where they were all right. Working so close to the ground, I crawled, stooped, squatted and actually lay down to apply concrete. Afterwards, my legs had something to say about all of that stretching! 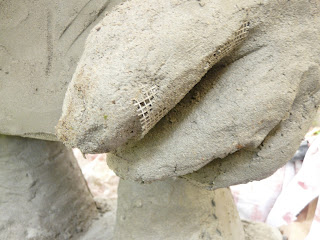 Here's an example of a spot where the mesh needed to be covered. The fingers were a particular challenge as gravity wanted to pull any concrete I applied to the ground. Over and over again, I'd gently tap some concrete onto the form, hoping it would stay put. I found that using small amounts helped. The fingers ended up far more bumpy than I would have liked, but at a certain point, once I had them covered, I was afraid to look at them let alone touch them! Even a swift press of a trowel would have undone painstakingly slow work. 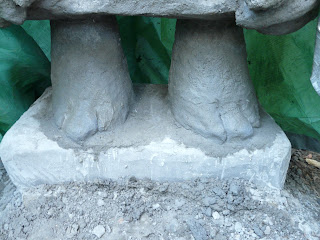 The beast was all covered, but then suddenly, I knew there needed to be toes. I had always felt that this beast wanted toes, but when I had made them out of styrofoam for the basic form, it hadn't looked right. So, I'd thought, "Okay. No toes." But the beast thought otherwise! Concrete toes. 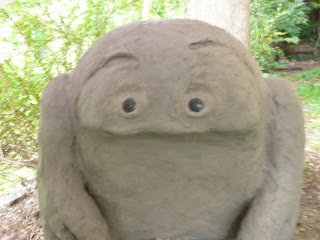 Sometimes the expression of a beast takes a lot of trial and error before it appears. Not so with this one. And I would never had expected this look! 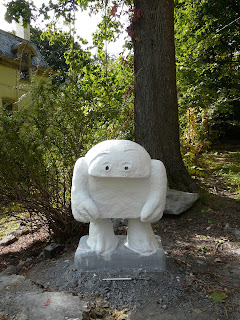 I used a white primer to seal it up. 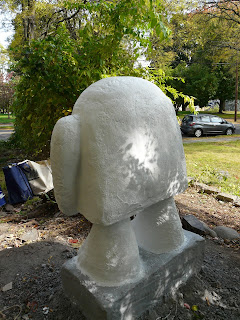 Suddenly the sculpture had a Presence. Still, it looked anemic, and just like making the first mark on a fresh piece of beautiful paper, I was nervous on what colors to use and what the overall look would be.  Jessica had mentioned that she liked the color of the styrofoam beast. So, I took a scrap to the local art supply store and looked at the spray paints. 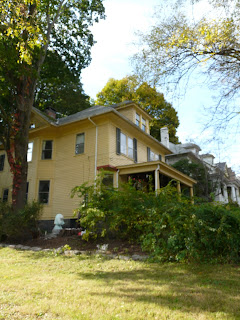 I have never used spray paint before, and I was looking forward to doing so! Tricky to chose paint color based on its tiny plastic cap! I wish that when I told the guy at the art store that I was a newbie, he would have mentioned that the nozzles can clog with paint! I got down to one nozzle that I had to switch between cans of different colors!! It was silly. 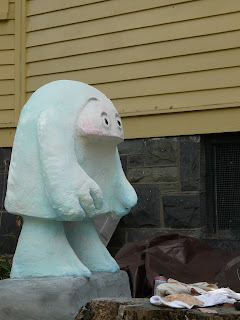 I worked my way into a frenzy of paint application! Back and forth between two different blues, white and silver. 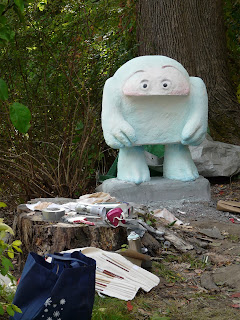 I was so in the mode of painting, I didn't stop to take pictures of my progress. When I first applied the blues, they seemed so bright and colorful! However, the end result is a rather light pastel thing. The face was the last to be painted, and the pink spray paint was too forceful. I could not get a soft gradation, so I opted to work with paint brushes. I sprayed a piece of paper, and then dip the brush into that. 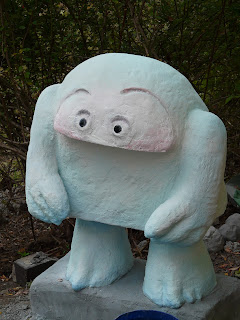 Once those rosy cheeks were just as the beast wanted, I knew that I'd done my job. This project began in June, and now, 5 months later...finished.