Where are they now?

After the 50 Beast Show, just about all of the beasts had met people they liked and had decided to move in with them. (Beasts are very fond, intrigued and beguiled by people.) There were many situations where beasts went off in groups to live together.

As it turns out, Hap, The Beebs, Red Rock Beast and Yule Beast all went to Rhode Island. Not too long ago, I was so very happy to receive some photos of the crew in their new digs! 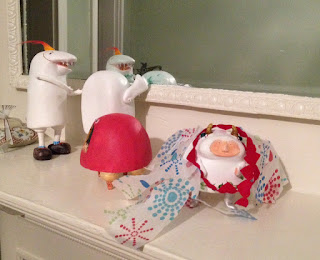 Yule Beast decided that it was truly Tea Cup Beast and in this picture you can see that it was getting dressed up because it was going to be presented (as a present) to a new person. 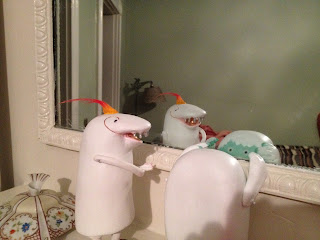 I think that this picture is so charming! The Beebs is quite taken with itself, staring fixedly at its...coiffure?... while Hap looks on laughing and giggling helplessly. 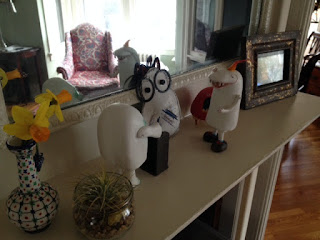 Then suddenly, a new beastly personage appears in the group! It looks particularly intelligent. 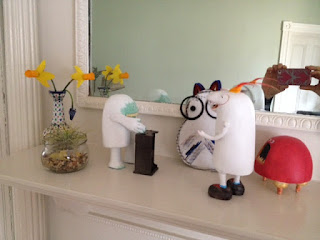 Apparently, there is a political debate going on. Perhaps the beasts are being influenced by all of the political talk the people around them are constantly discussing...? 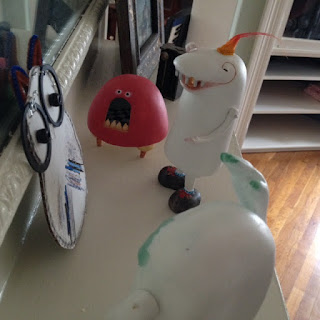 After this post was written,
I received notice that the Beasts were
indeed, gearing up for a very special rally! 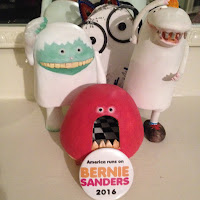