Jim Henson's The Dark Crystal held a creature creation contest to promote the proposed sequel to the movie, The Dark Crystal. Although the contest began in July 2014, I did not discover it until the second week in August. Contestant proposals were due on September 1st! 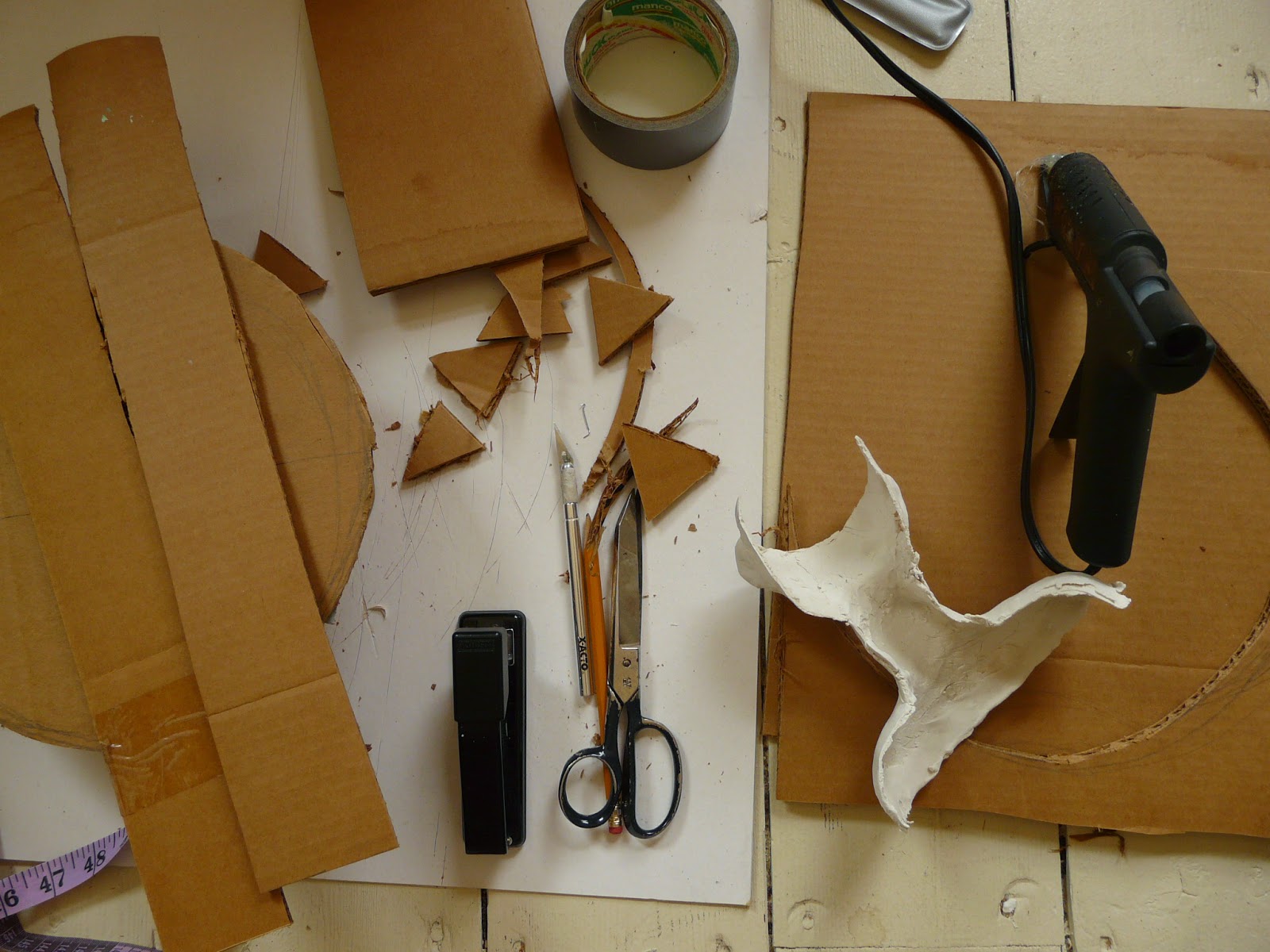 Well, I would have to get started! I imagine that if I had started in July, I would have created a creature from scratch. However, pressed for time, I looked about my studio for anything I'd been working on that could be altered to fit the contest rules. 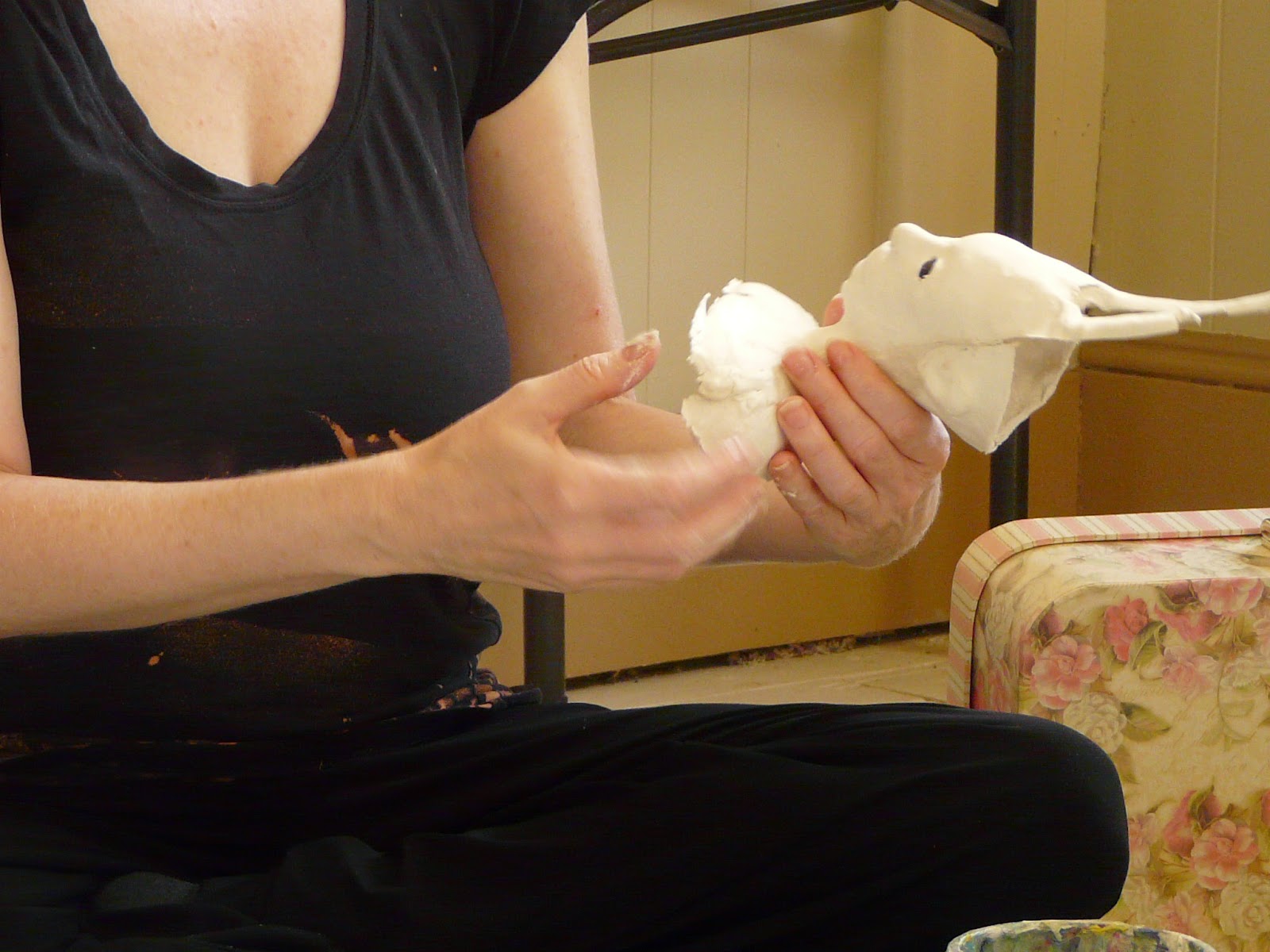 I found a bust of a sculpture / doll that has been waiting patiently for some attention, and from this, I hatched an idea. 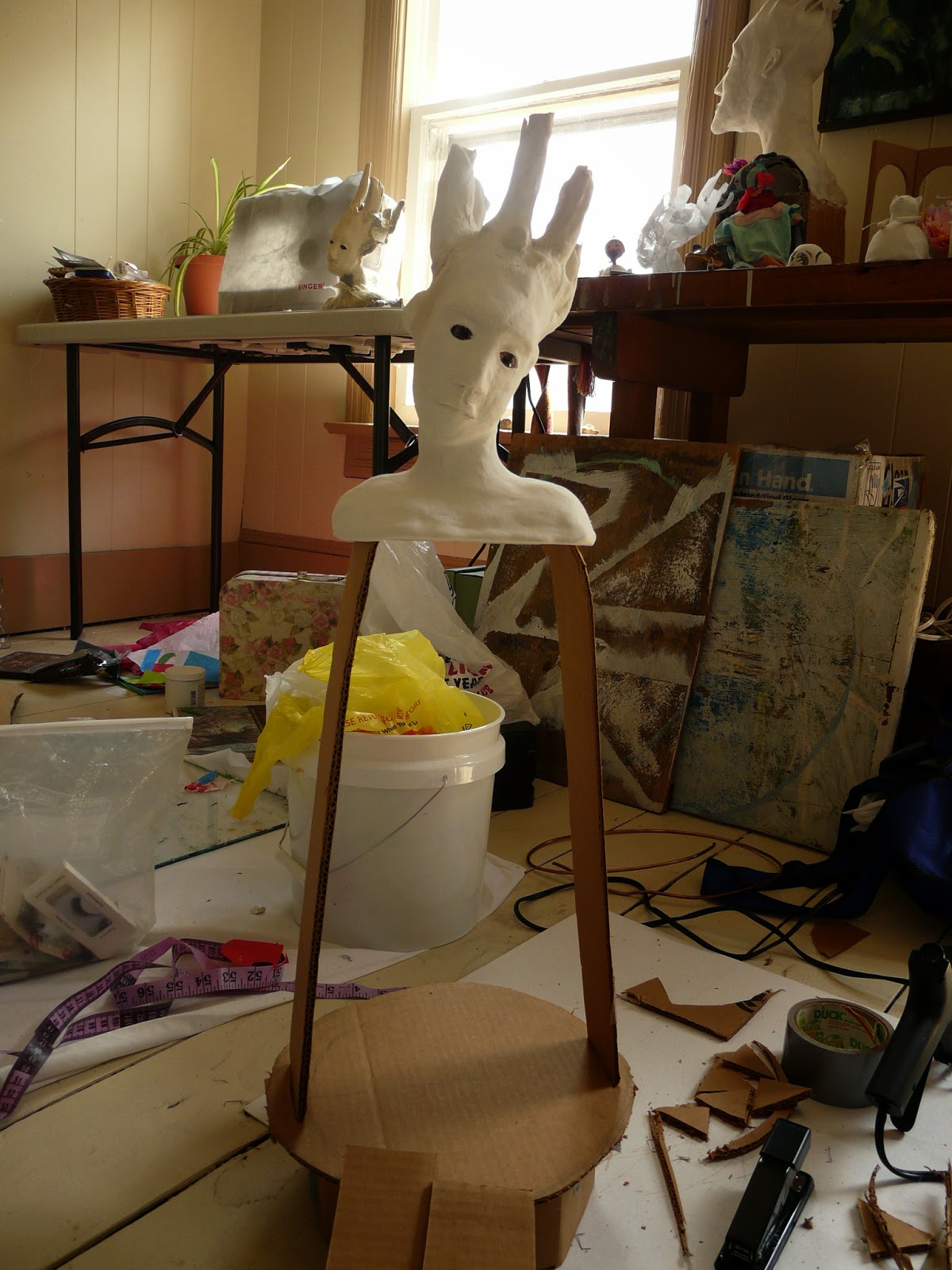 The contest rules specified that they did not want any drawings, only three dimensional proposals. Also, they did not require a finished piece, they would accept a maquette! To be honest, I found it very liberating to work on a piece that would not last forever...or a long time, anyway. In working on my other pieces, I am constantly considering the longevity and solidity of finished work. 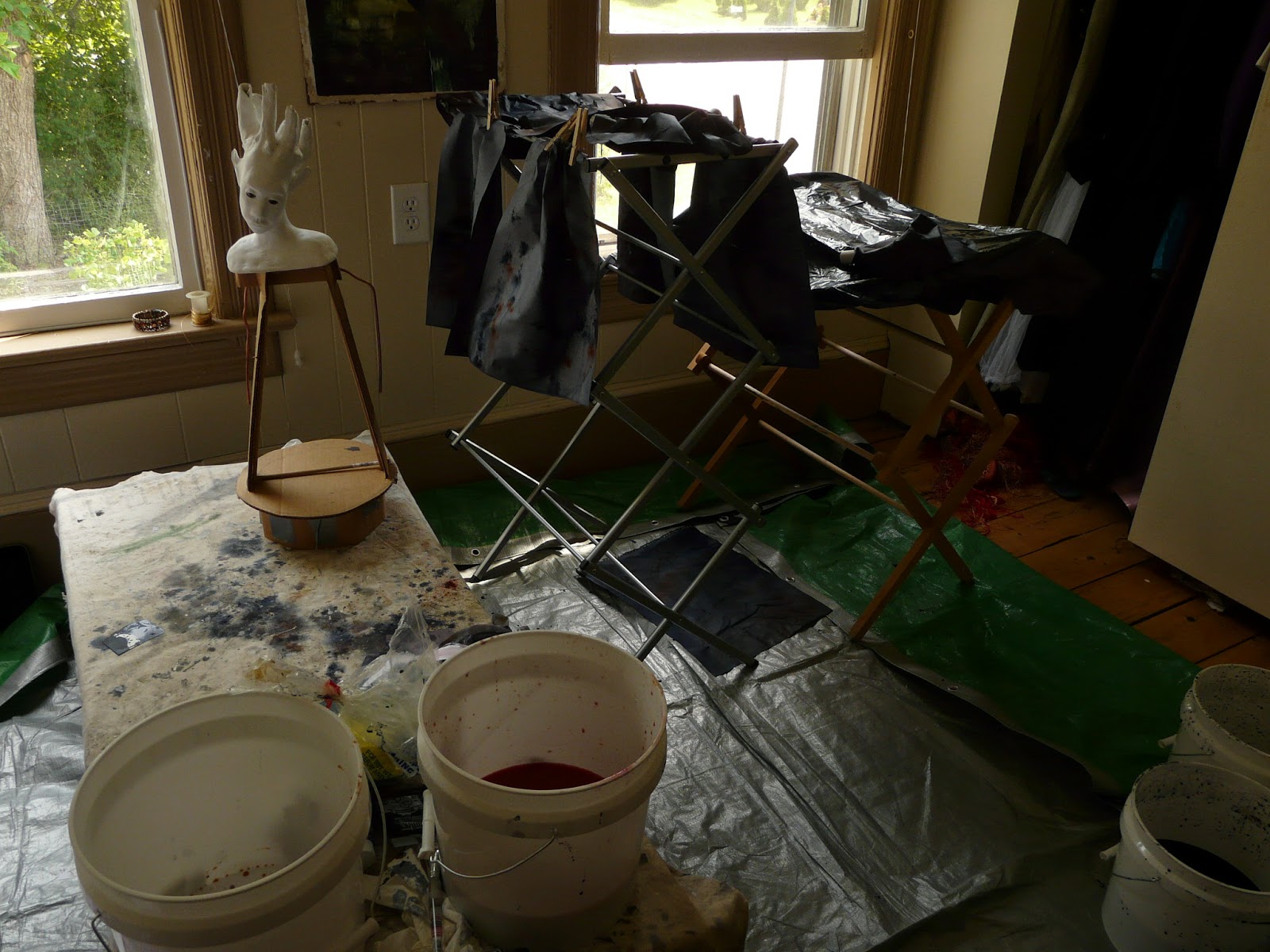 So, I decided to work with paper, as it is very malleable, dries quickly and can be cut easily. I ran out an bought some dye and played with paper and water! Fun. 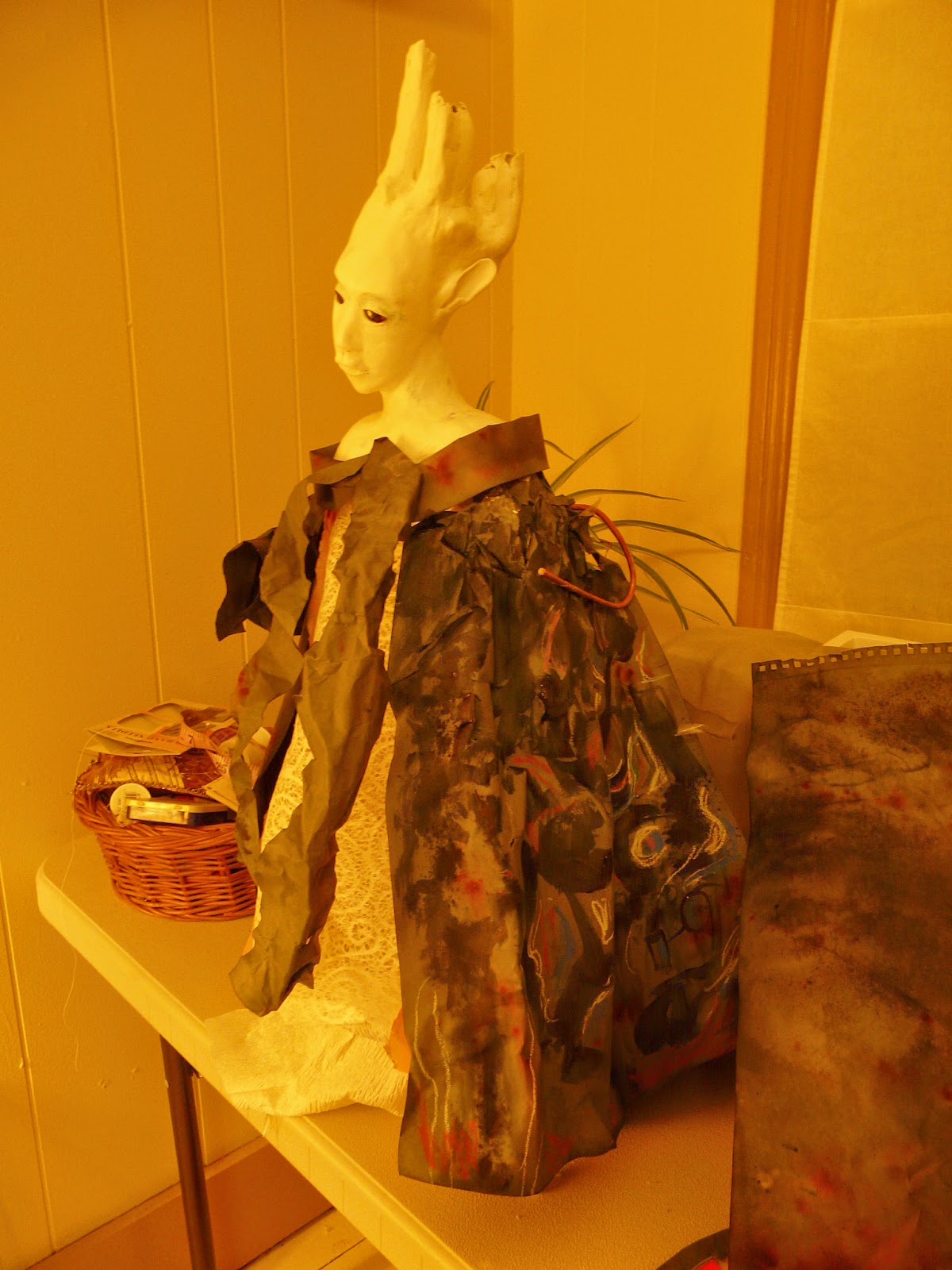 Here is the creature with the beginnings of an outfit. The head has not been painted yet, but you can see the eyes. I had purchased a bunch of wonderful animal eyes from tohickon glass eyes years ago, and used turtle eyes for this piece. They are stunning glass eyes and I hope to use more with dolls in the future. I considered drawing on the "outfit" to add some detail as the characters from the Dark Crystal are very, very detailed. Brian Froud was the creative force behind the creation of that whole world, and he spent five years putting it together. 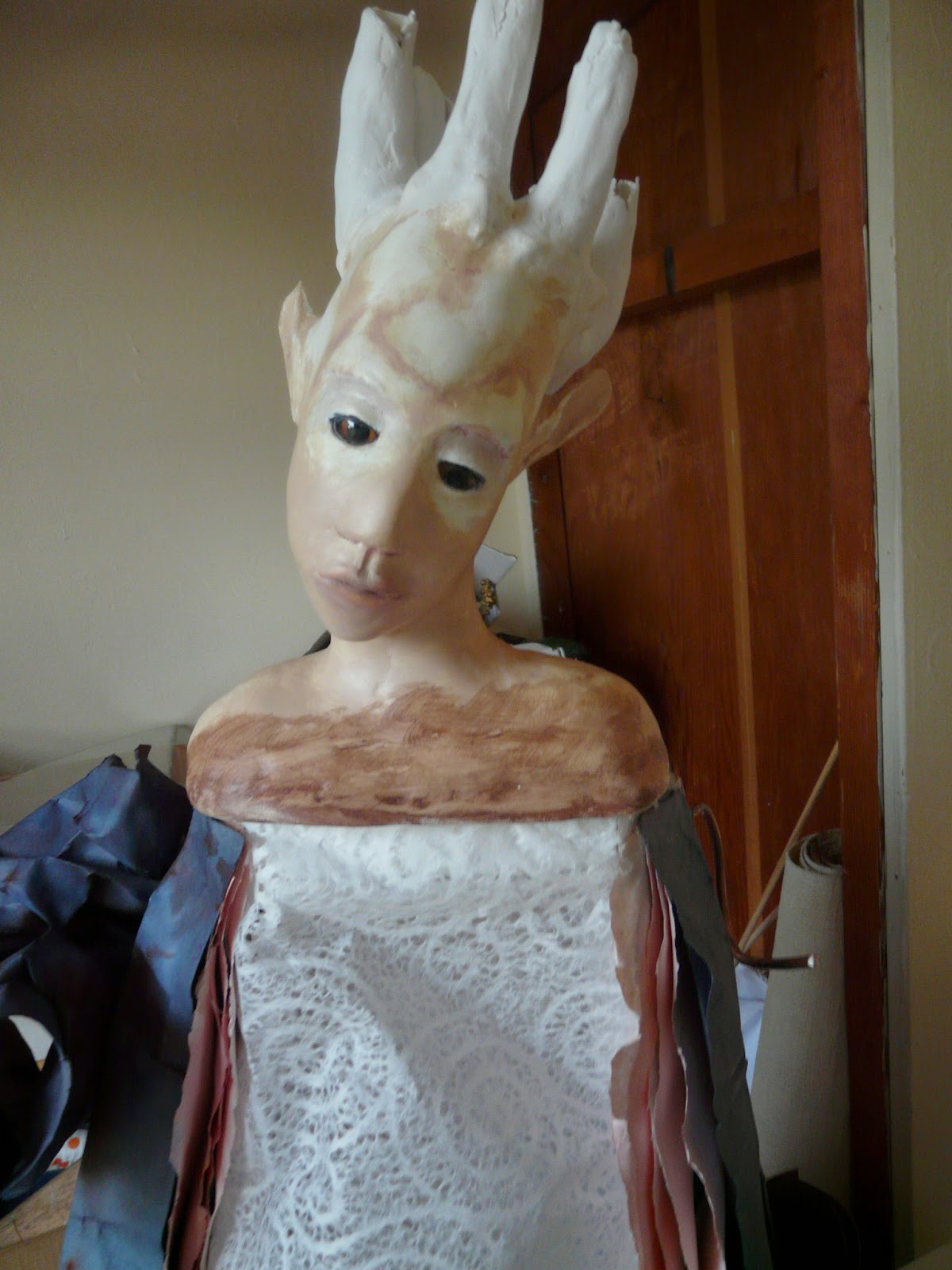 Finding something in my studio that I thought would fit in the Dark Crystal universe just goes to show how influenced I have been by Jim Henson and Brian Froud. However, for this proposal, I created a creature that was partially Gelfling and partially Urskeks. So, I widened her nose quite a bit, increased the size of her brow and elongated her ears. 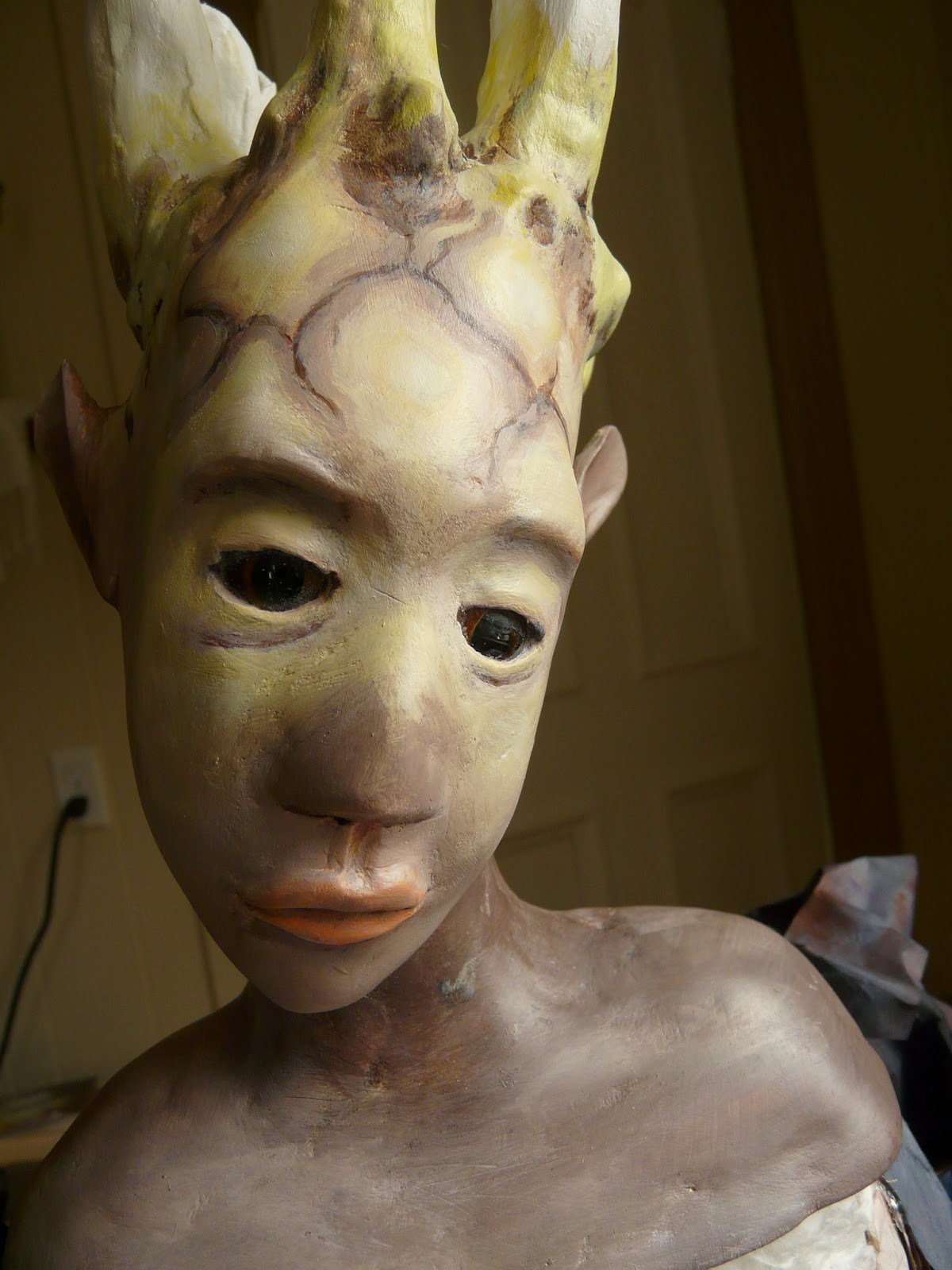 I wanted to show that her crown was more like a Urskeks, so I used light colors. 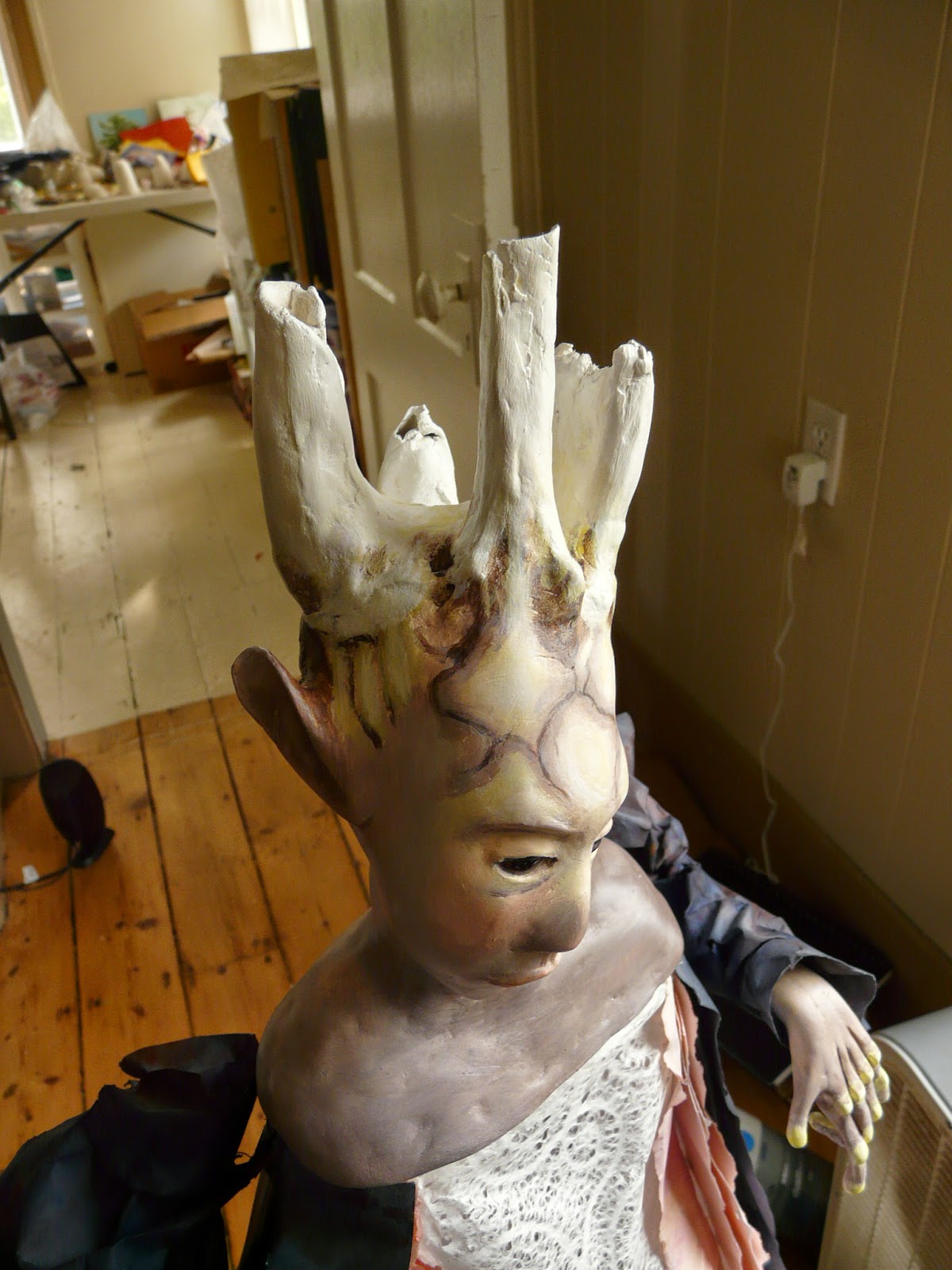 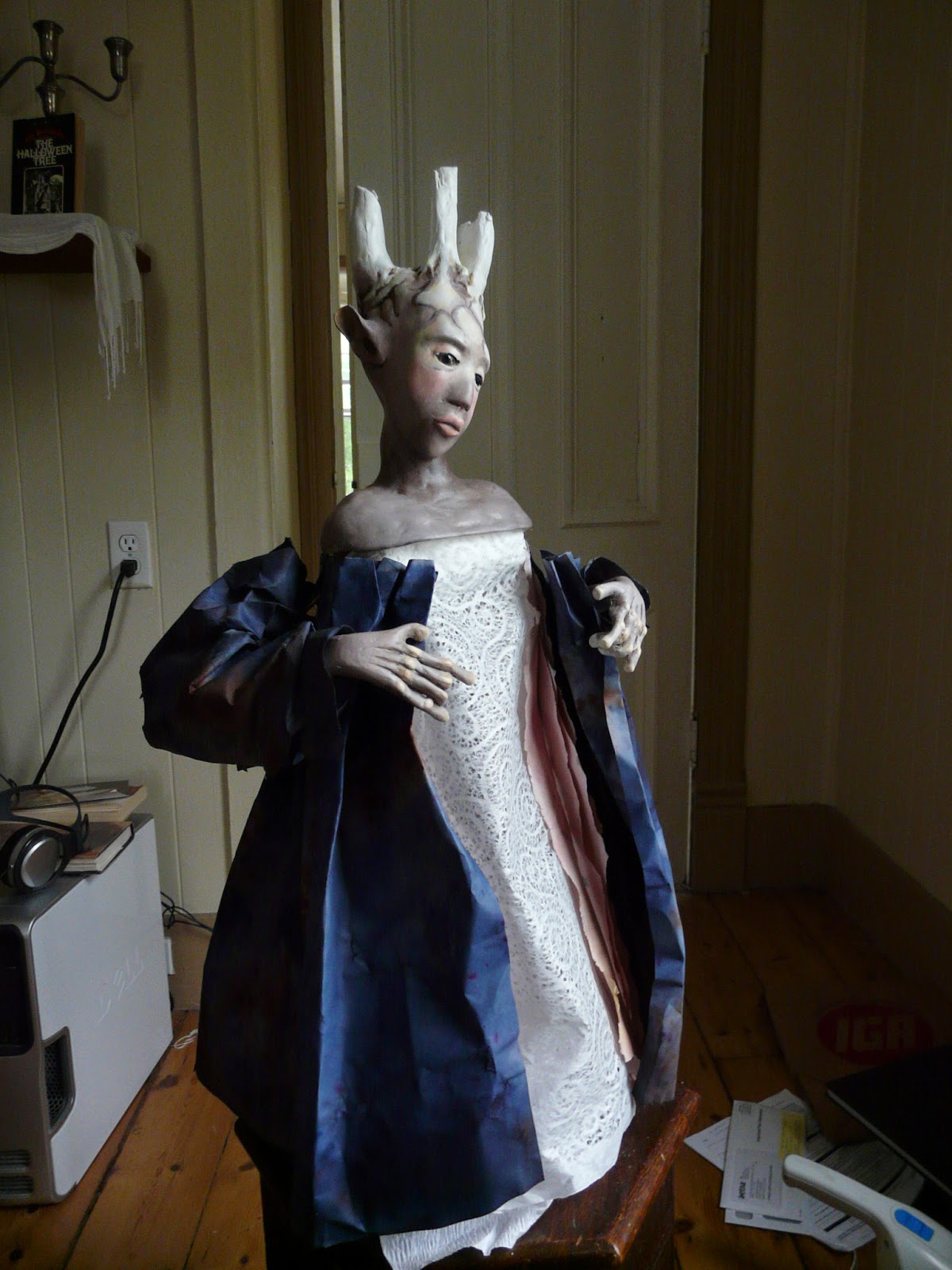 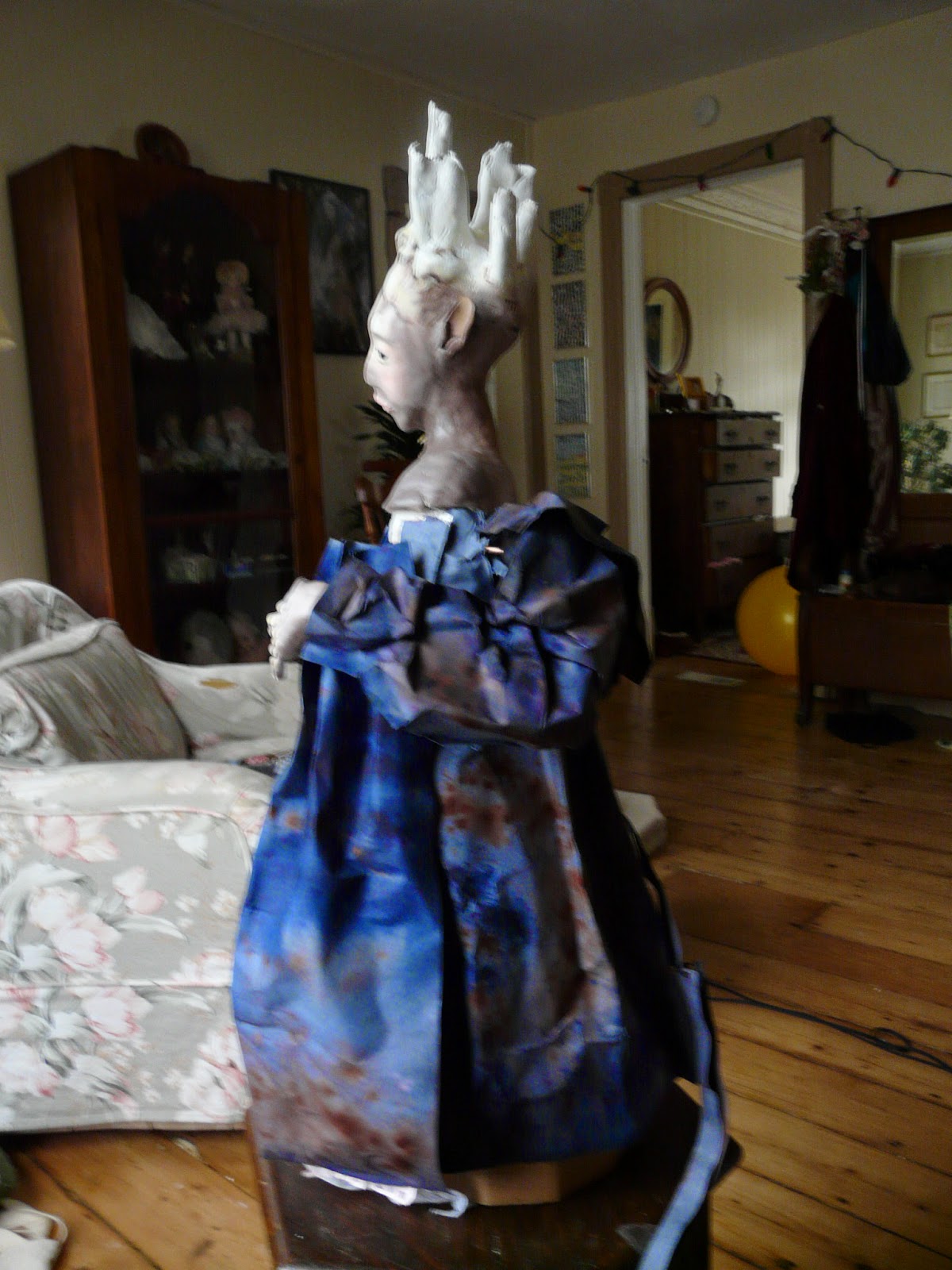 Using the paper was wonderful and dramatic! 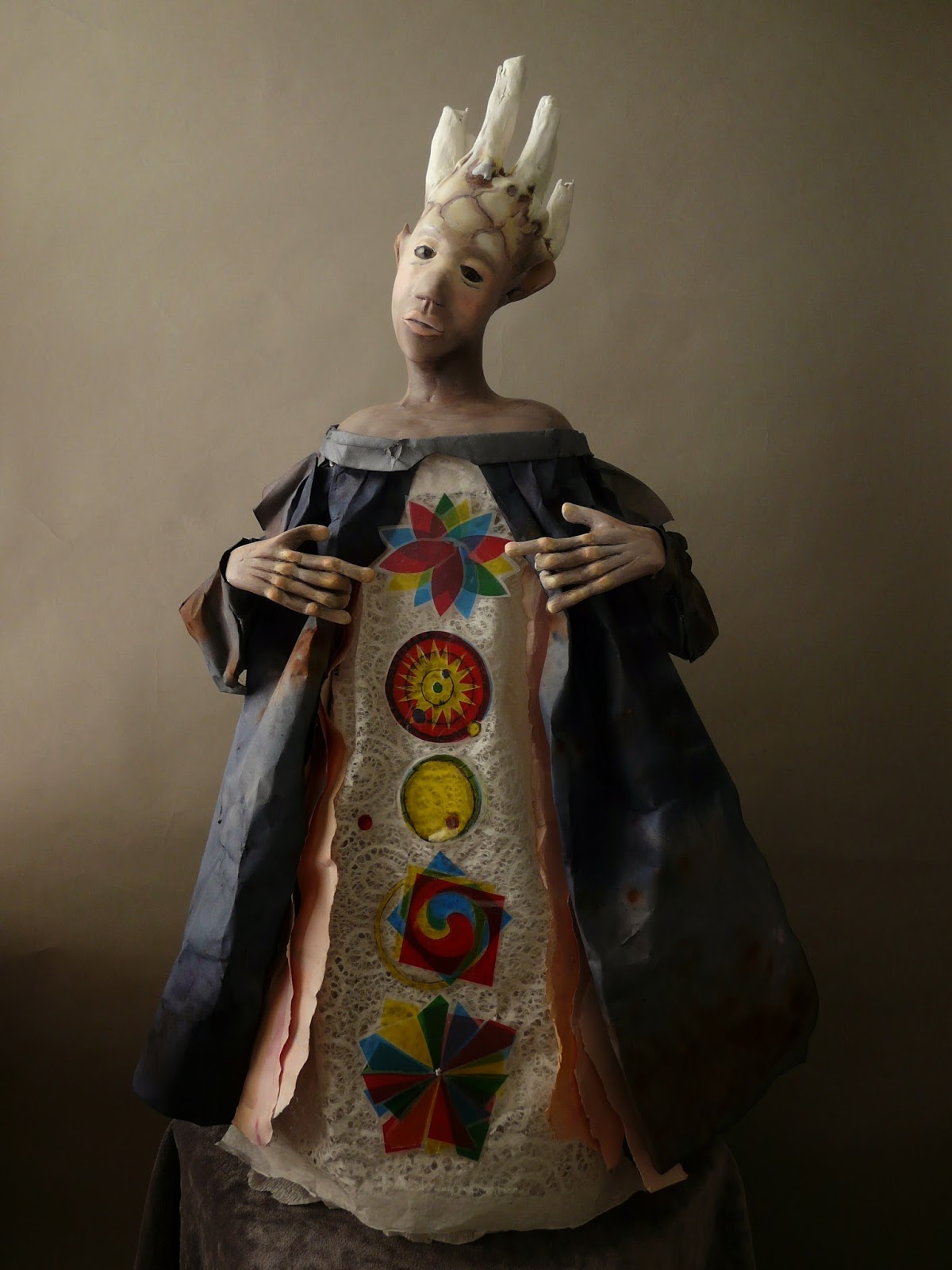 So, these designs down her front resemble the designs that Brian Froud created. The second image down is a replica from the book The World of the Dark Crystal. These are made with acetate. I used permanent marker to add details. The symbol on the bottom has two layers and are attached at the center, so they can revolve...making more colors. 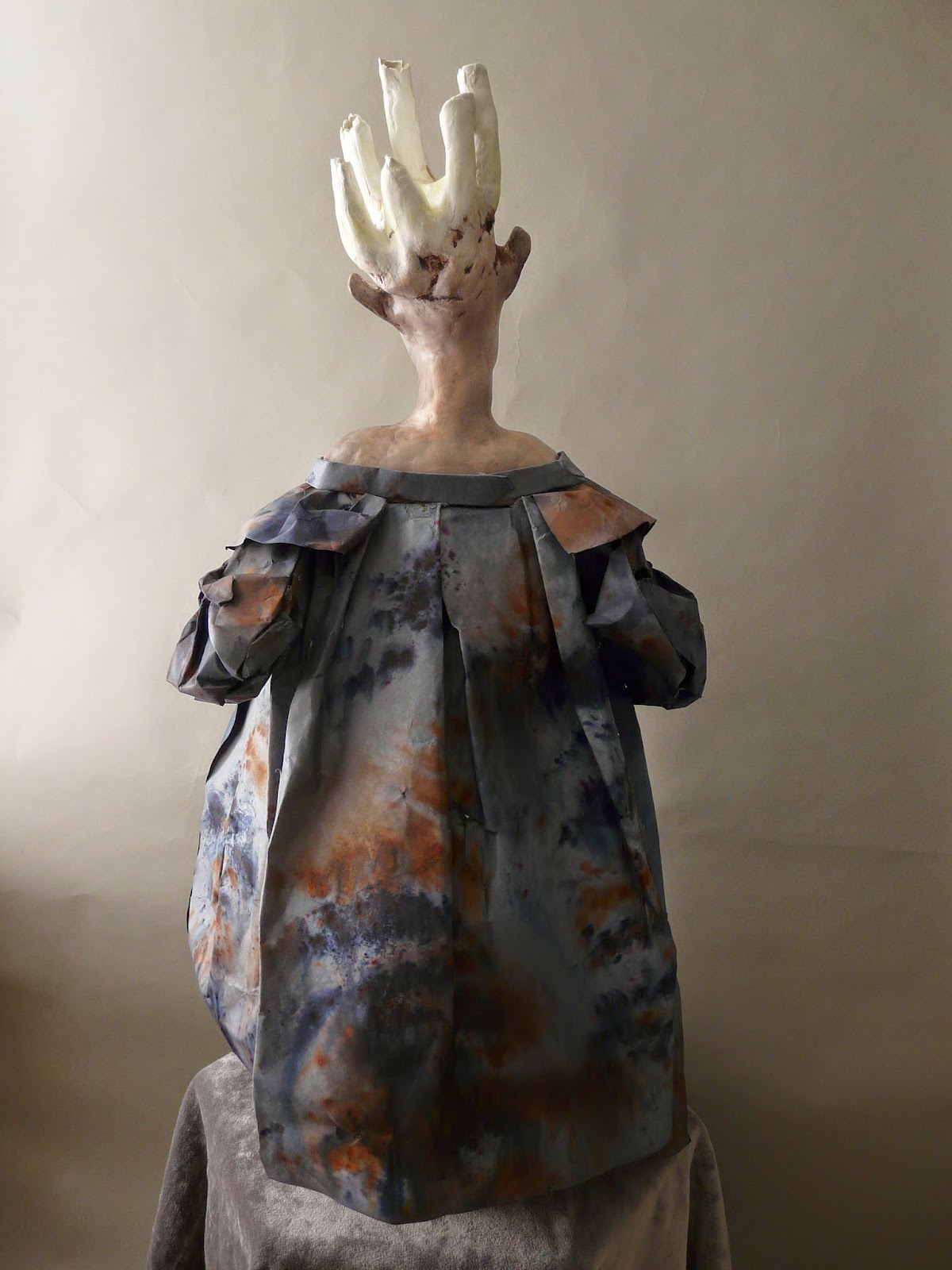 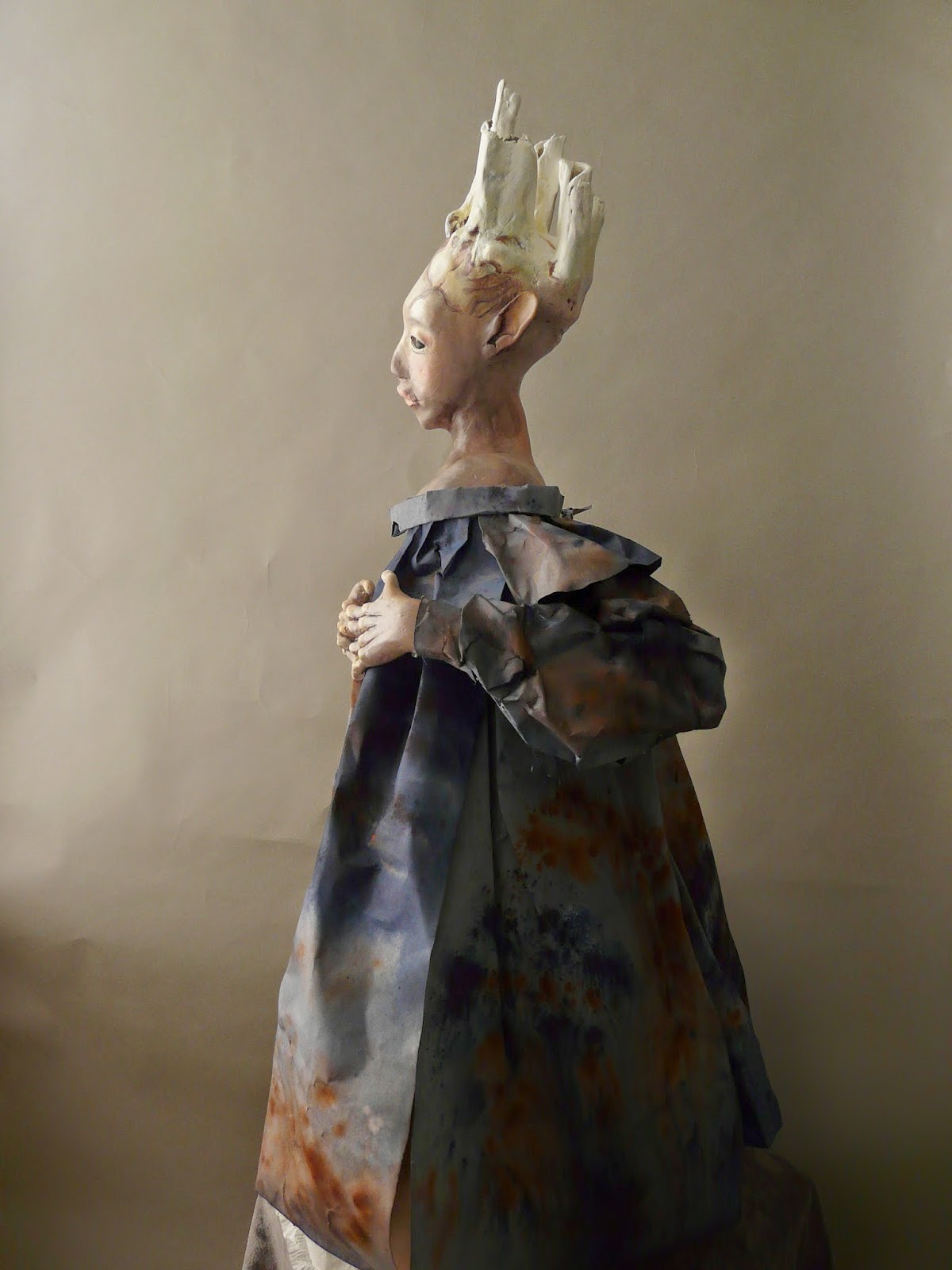 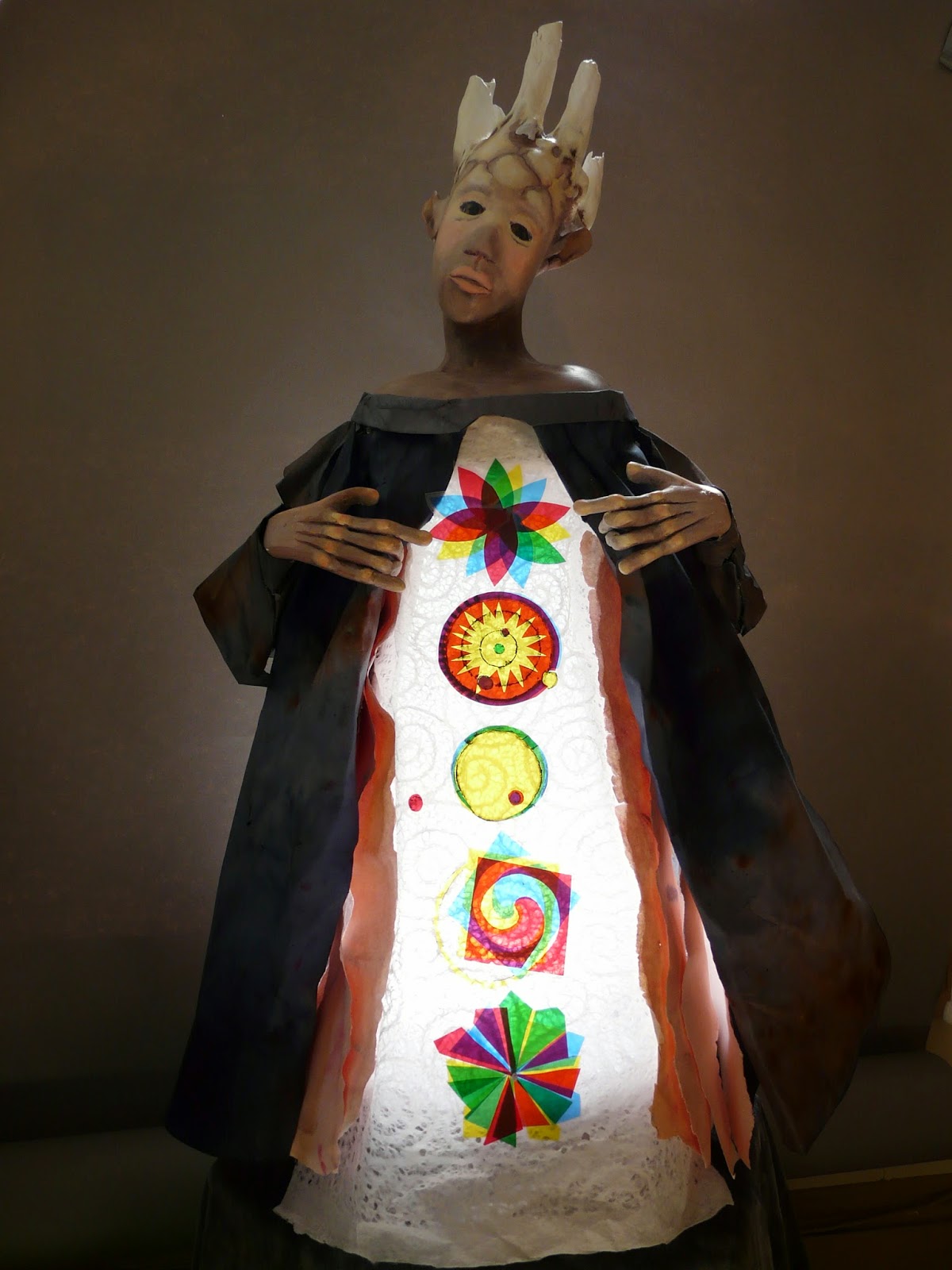 The back of her cloak is removable, and when she is paced in front of a light source, the acetate symbols glow! 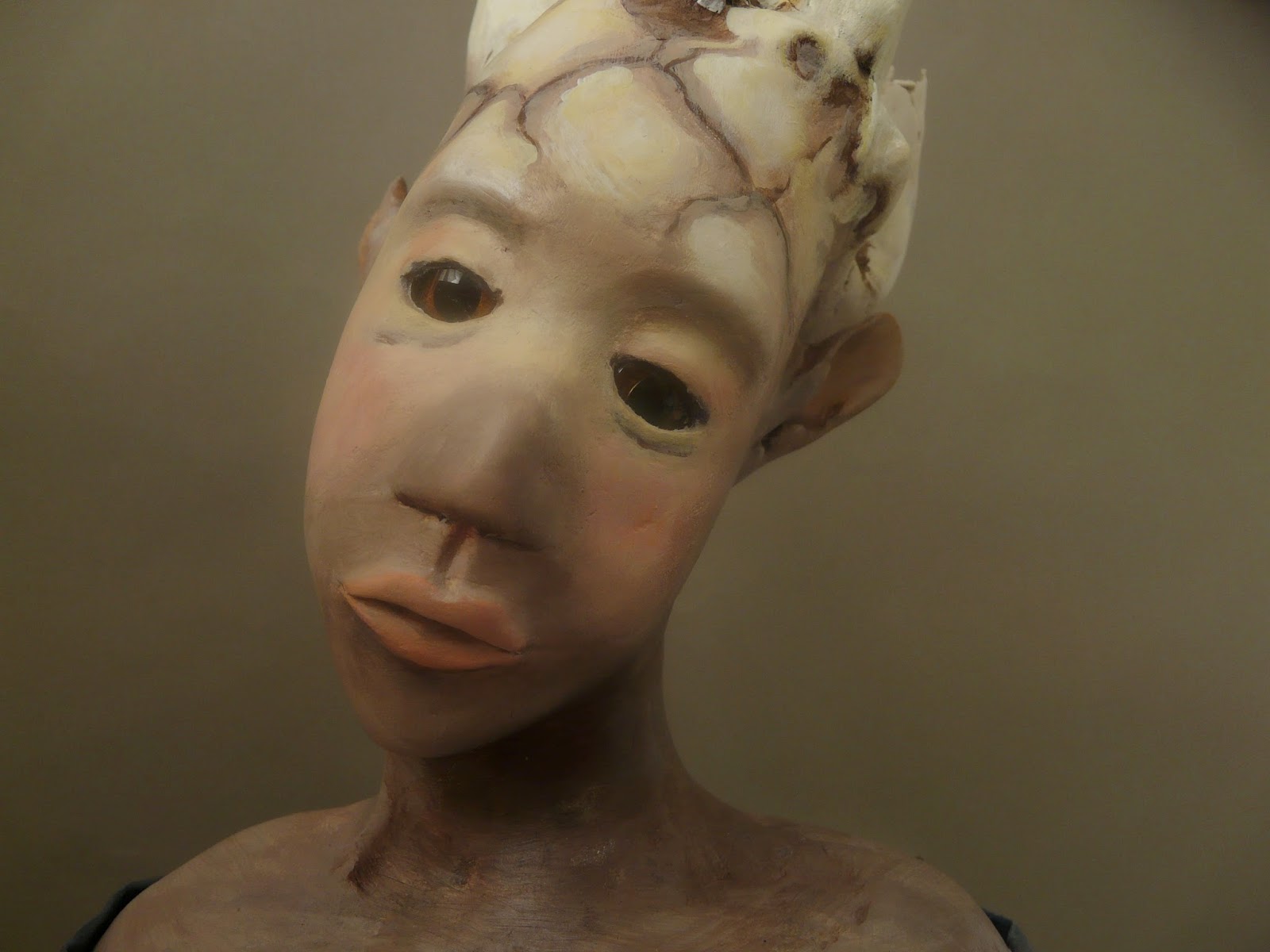 So this being's name is Shinbyeong, which a Korean term associated with shamanism. Here is the basic idea I had for this being's background. Unfortunately, I didn't realize that the winning story for the sequel was available online, so I'm not sure if Shinbyeong fits in really.
Once again the Urskeks  try to alter the natural path. They have the best of intentions, but they forget that for every action, there is an opposite reaction.
The many descendants of Kira and Jen have particular attributes. When the Dark Crystal was healed and the Urskeks regained their wholeness, the Urskeks filled Kira with whole, healing energy which brought her back from death, and also altered her forever.  This alteration was passed down through her children.
Many of these changes were subtle and no one noticed, but when Shinbyeong* (shin´-beeyo) was born,  the midwives knew that she was strange because she was born with five fingers instead of four. For this alone, she was teased by other children and looked upon with suspicion from some parents.  As she grew,  it became apparent that she expressed qualities and physical attributes of the Urskeks. Everyone knew of the devastation the Urskekses brought upon Thra, and many looked upon Shinbyeong with fear and unfounded mistrust. Since Kira and Jen were the only living Gelfling to have actually seen and heard the Urskeks, they felt the deepest compassion for her, and with kindness, they sent Shinbyeong to live with Augrha.
Augrha showed Shinbyeong how to be strong and soft, wise and innocent, direct and gentle.  Unlike the Urskeks who focused all of their energies on the stars, Shinbyeong also studied the plants, the rain, the rocks - taught by Aughra.   Shinbyeong grew in a balanced way, and she loved Augrah dearly but she missed her own people and community, always. All of these teachings, though, would help her through her great change. Just as Shinbyeong left childhood and before she entered adulthood, at that delicate time, she began to hear and feel sounds deep within her chest. Then she began to hear voices. It was the Urskeks telling her that they were going to fill her with healing light and that she would be able to heal all beings on Thra. They told her that whenever there was a need, all she had to do was sing a specific song/chant, and healing light would shine through her. Symbols developed on her body that the light would pass through. These symbols include every color, including black. The light, the dark and all in between. Once the healing light begins to flow out of her, the symbols spin, creating more colors.
She accepts the honor of being a channel, but doesn't realize what an additional physical and emotional burden the influence of such intense power would bring.  That some would be afraid of her, that the healing would be in ways that the ill can't imagine. Sometimes the best "healing" is to help someone pass on to the other side.  There are many who think that it is her choice to heal in the way the light does, but she is just a conduit.
So, she wanders the land on her own. There are those being on Thra who honor her and perhaps revere her. Some travel with her as if she is a guru. A tiny, furry frog-like species love to travel with in the crown on her head as they are filled with joy to be in her presence. They sing a trilling song, and smile a lot.
To this day, the Urskeks, have felt terrible about the devastation they wrought on Thra, and they yearned to heal the hurts they caused. They now exist far away from Thra, so it was their plan to have Shinbyeong be a conduit for their healing power.
Shinbyeong began to hear the voices of the Urskeks  within her, and was frightened. The sounds filled her chest and pushed and pulled within her, until she felt her body changing. Over time, beautiful symbols appeared on her body that would shine out light. The symbols were of all colors made from light, including dark.
What the Urskeks did not think of was the toll it would take on Shinbyeong and her life.  They did not consider that her behavior would frighten her clan, that she would be excluded from the intimacy of the group, that the great power would fill her, then leave her exhausted and befuddled. It is an honor and a burden. So she walks alone.