Luckily we arrived somewhat early as by the end of the day, the place was packed. It was somewhat surreal to leave the bustling city and find yourself at a rather fort like cloister. Also, it was fun to see every ethnic group and culture all dressed up in what they thought was appropriate Faire costume! Although there was plenty to see outside the building (vendors, jousts, puppeteers and musicians), we did go into the museum itself.

As we began to move through the rooms, our group dispersed as everyone had their own interests. I ended up taking over 200 photographs! 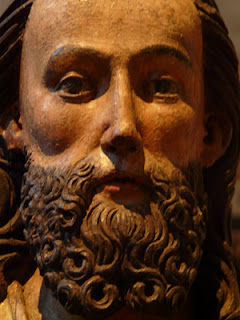 I found myself wanting to record every interesting things so that I could refer to it at a later date when creating my own artwork.


I was particularly interested in the sculptures. Look at that beard! The Woodsman, whose picture is in a previous post, is bearded. I think that I will make more like him, with these references in mind.

I highly recommend a trip to NYC to see The Cloisters!